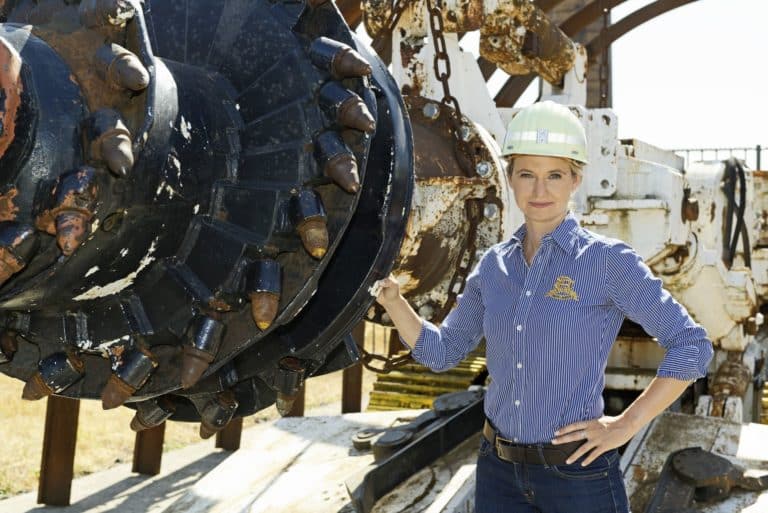 Elisabeth Clausen is the first woman to hold the chair of the RWTH’s renowned Institute for Advanced Mining Technologies. She is set to lead mining into the 4.0 Era.

Perhaps surprisingly, mining is leading the field. Back in 2015, when most other branches were still dallying around on the 3.0 level, the RWTH’s Institute for Advanced Mining Technologies hosted a conference with the title “Mining 4.0”. And now, a woman is heading this long-renowned mining institute, one of the largest of its kind in Germany. Just to think that, back in the day, women were strictly prohibited from going down the mines – and now here’s Elisabeth Clausen, Germany’s first female professor in this particular field.

Professor Clausen, born in Kiel in 1983, studied geotechnology, mining, and petroleum engineering at TU Clausthal, where, after graduation, she went on to spend ten years working as a member of the research staff. In 2018 she was appointed professor in Aachen. “The switch over to the RWTH was quite a change,” she says, “because of the sheer size of the university, the high level of dynamism and the variety of research and teaching topics.” And then, of course, there’s the pressure to transition to “4.0”, which calls for a stronger focus in the areas of digitalisation and computerisation. Research is now concentrating on tomorrow’s mining, on the development of robust, networked machines and processes for the extraction of, for example, rare earths.

“Tomorrow’s mining will hardly be visible above ground level anymore.”
Mining operations vary greatly in size, says Professor Clausen. They range from small mines in which single families toil old-style with pick and shovel to highly automated operations where automatic shearer loaders using a range of sensor technology are deployed. In opencast mines in China, huge, completely autonomous mining trucks have been in operation for several years already. This is where research comes into play. Automated and autonomous systems that can handle the tough conditions of a mining operation are a key issue. “We are investigating various fundamental aspects for the development of autonomous extraction systems in both deep and opencast mining as well as in deep sea mining. This includes, for example, underground localisation, positioning and navigation, material recognition and cutting technology,” Clausen explains.

In the institute’s own Rock Cutting Center, for example, the plan is to create the technological bases needed for an extraction device to be able to autonomously recognise where it is cutting and where the deposit is located. Ideally, subsequent treatment will take place directly underground, so that worthless material is no longer unnecessarily brought up to the surface. This would also reduce the volume of spoil heaps. As Professor Clausen says, “Extraction of raw materials always involves an intrusion into nature. But tomorrow’s mining will increasingly disappear underground and will hardly be visible above ground level anymore.”

Leonardo super star, or maybe not?

Mathematician Philipp Grohs is one of the world’s leading experts in Deep Learning. Soon he will be teaching […]
zum Magazin