City of the future 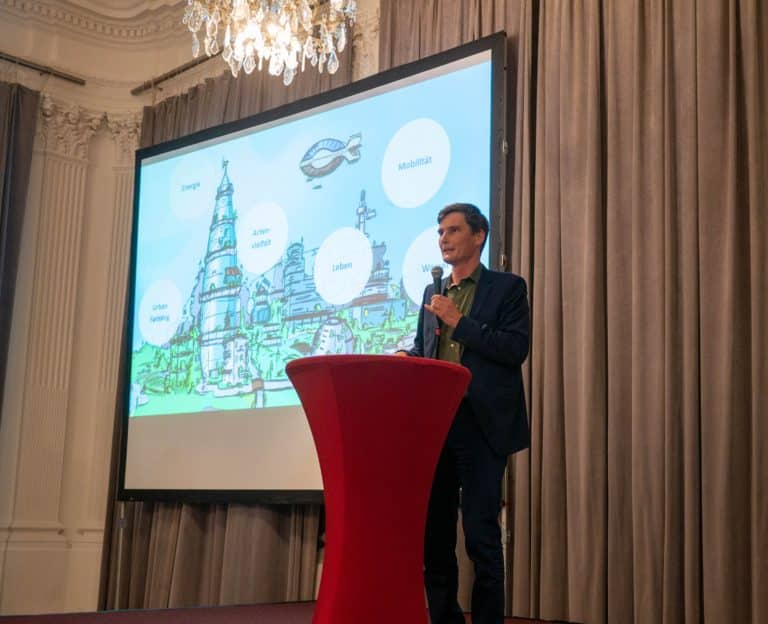 “Daddy, please save our planet!” – His little daughter’s plea has motivated mechanical engineer Achim Kampker to develop plans for a CO2-neutral city of the future. Not that Kampker wasn’t already acutely aware of the ongoing crisis. As far as climate protection is concerned, “It’s already five past twelve, perhaps even ten past twelve,” he says. “We simply have to make a start – and that’s what I’m doing right now.” And off he goes to save the planet.

Saving the planet? A noble mission! So how is he going to do it? With his plan for the CO2-neutral city of the future. The RWTH professor wants to start building “humanotopes”. Humano-whats? Humanotopes, in his vision, are cities or city quarters with a population of about 25,000 human beings. Inside them, everything the inhabitants need to live is available and can be produced. Everything is produced under sustainable, ecologically sound and CO2-neutral conditions, even the energy and the mobility that the humanotope itself needs. So a humanotope is basically a microcosm – packed with biodiversity – which its inhabitants theoretically will never need to depart from.

Evolution instead of revolution

Imagine it along these lines: natural veggie gardens are concentrated close to the nearest agriculturist to keep logistical expenditure and emissions to an absolute minimum. In a humanotope, the concept of “the traffic revolution” would be given a new dimension and a different direction. Evolution instead of revolution. One essential aspect would be to put an end to individual mobility to the greatest possible extent. Inside a humanotope, kindergartens, schools, workplaces and clubs would ideally all be reachable on foot or by bicycle. Moreover, social differences would have to be softened: Someone on income support might well be living next door to a millionaire with a huge multiple dwelling. What Kampker is sketching out here and illustrating in his 3D-model is nothing less than a new world with a new social future.

An association for engineers who want to save the planet

But how will this pioneer of e-mobility, environmentalist and aspiring city planner go about realising his vision? A few weeks ago, he founded the association “Ingenieure retten die Erde” (Engineers Save The Earth). It’s time, says Kampker, to get engineers working on the problem of reconciling humanity with nature. That’s the prime mission of his association, and is anchored in its statutes: Anyone who wants to join must become a role model – in both their professional and their private life – regarding protection of the environment.

By autumn this year, the association intends to announce two competitions. One will be a contest of ideas to further substantiate the concept of the humanotope. What will be needed in one, and what will be possible? The other will invite interested cities, communes and rural districts to propose specific areas that could be turned into a humanotope. Five German cities have already approached the association of their own accord. One of them is Aachen, which sees possibilities of building a humanotope, for example, in the old industrial zone on Jülicher Straße in the north of Aachen.

Building a humanotope would cost several million euros. Obviously, it’s not going to happen without investors, but Kampker is determined to do his bit. In the coming weeks he plans to develop a fund-raising concept in his not-for-profit association to publicly collect money as share capital. And anyone who knows this mechanical engineer well enough will have no doubt that his visions will not remain just a utopian dream. After all, he’s the guy who, with the company Streetscooter GmbH, made e-mobility marketable.

“Too few people are prepared to just get up and start doing something, to take a risk for the sake of future generations,” says Kampker. But he’s doing just that – and probably not least because of his daughter.

Mathematician Philipp Grohs is one of the world’s leading experts in Deep Learning. Soon he will be teaching […]
Heads

Hand prosthesis from the 3D printer

Affordable and easy to produce – Karim Abbas, a student at the FH Aachen University of Applied Science, […]
Heads