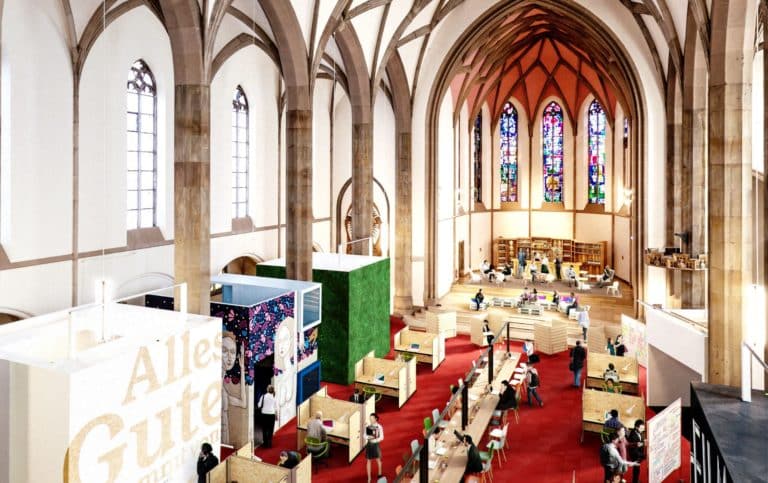 The “digitalHUB Aachen” gets to work – in the former St Elizabeth’s Church.

St Elizabeth goes digital – the former church on Jülicher Straße is now the home of the new digitalHUB Aachen. With this high-profile location, a further step has been taken towards the establishment of a central venue for start-ups and small to medium-sized IT companies in Aachen.
Working in a former chancel? Well, why not? After all, for the past few months, the initiators of “Aachen goes digital” have felt as if they were in a movie anyway. The plot: a region has less than two months to raise the sum of 1.5 million euros. If successful, the region could use the capital to apply for the establishment of a digitalisation centre and make itself fit for the future. The happy outcome: with Iris Wilhelmi as the managing director, the “digitalHUB Aachen” is now up and running!
“Start-ups, SMEs and industry will work closely together here to master the challenges of digitalisation,” says Ms Wilhelmi. The hub has three things to offer: working together in a central location in downtown Aachen; active “matching” of start-up companies, IT SMEs and SMEs from industry and other sectors; and consulting and training as well as an entrepreneur service for digital start-ups.

This as possible through the merging of the “StartLab” at the “Transfer and Entrepreneurship Center” of the RWTH Aachen University and Aachen’s Chamber of Industry and Commerce (IHK Aachen) into the new digitalisation centre. “The ‘digitalHub’ is a stroke of luck for the whole region,” says IHK Managing Director Michael F. Bayer. “Here, new business models will emerge that will also offer enormous opportunities for commerce.” The core task of the “digitalHUB Aachen e.V.” is to network innovative start-ups and IT SMEs with industry and the traditional German “Mittelstand” in the course of the digitalisation process. The association was founded in July 2016 and has more than 100 members.

Magical location
The foundation of the association followed funding approval from the State of North Rhine-Westphalia for one of its six planned “Digital Economy NRW – Hubs”. “We convinced them that there is a willingness in the Aachen region that goes far beyond mere lip service,” says Dr. Oliver Grün, CEO of the company GRÜN Software AG and President of the Federal Association of IT SMEs “BITMi”, who originally pushed for the concept with the initiative “Aachen goes digital”.

According to the jury, the Aachen region had “presented a concept for the establishment and operation of the hub that was thoroughly convincing in every respect”. The preparation of the application had “triggered an impressive ‘bottom-up’ digitalisation movement in the region,” the jury commented in its verdict. In a crowdfunding campaign, more than 100 enterprises and organisations had made 1.5 million euros of equity capital available – in the jury’s opinion “a best-practice example of how modern business development functions today”.

Along with Aachen, the other winners of the tender “Digital Economy NRW – Hubs” were Bonn, Düsseldorf, Cologne, Münster and a joint application from the Ruhr region. Their digitalisation centres will all be funded over the coming three years.

And the magical location? Only recently did the family of Aachen investor Norbert Hermanns, CEO of the company Landmarken AG, take over St Elizabeth’s. Mr Hermanns intends to invest in the necessary upgrading of the church to provide the infrastructure and environment for a co-working space with up to 100 modern, flexible workstations. In addition, the church will also be used as an event venue – in a joint project of the digitalHUB Aachen and the Hermanns family building on the positive experience already gathered with the “Hotel Total”.

What and who is the “Hub“?
The term “hub” means “junction” or “central intersection”. The partners involved in the digitalHUB Aachen are the RWTH Aachen, the FH Aachen, the Bundesverband IT-Mittelstand e.V. (BITMi), the Founder Region Aachen, the IHK Aachen, the HWK Aachen, the City of Aachen, The City-Region Aachen and the Diocese of Aachen. Dr. Oliver Grün, CEO of GRÜN Software AG and President of BITMi, was elected chairman of the board of the digitalHUB Aachen Association, with RWTH Vice-Rector Professor Dr. Malte Brettel and IHK Managing Director Michael F. Bayer as deputy chairmen. 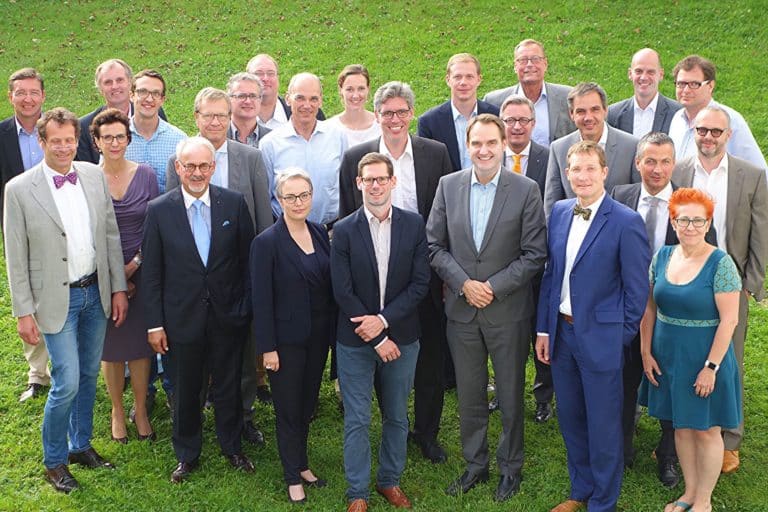 The “digitalHUB Aachen” gets to work – in the former St Elizabeth’s Church.
Have a look

Let there be sunshine inside!

The DLR location Jülich is now home to the world’s largest artificial sun. Together, 149 high-performance lamps can […]
zum Magazin