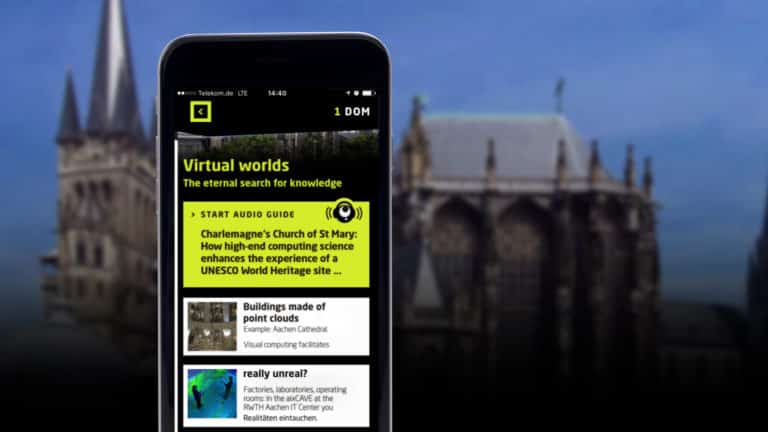 From the historic town centre to the RWTH Campus Central – Aachen’s new digital tour guide shows you at 13 stations how scientific history is being made in Aachen.

“The city and its universities are closing ranks,” said Lord Mayor Marcel Philipp when, as (almost) the first person to do so, he took a new special trip through Aachen, City of Science. With immediate effect, in the framework of the Project Future Lab Aachen, the City of Aachen and its universities proudly offer the science tour guide “FLApp”. It leads from the historic town centre to the Campus Central of the RWTH Aachen University, passing though a total of 13 stations. “FLApp“ takes you to famous and lesser-known locations, offers glimpses behind the scenes, and shows you what Aachen also has in addition to its long and illustrious history, namely science and research.

Robot world champions and rescuers of fish
Each of the 13 “FLApp” stations deals with a separate topic: virtual worlds at the Cathedral, the art of engineering at the Town Hall, communications at the International Newspaper Museum. “FLApp” takes you to hidden places like the Institute for Materials Application in Mechanical Engineering (IWM) in Augustinergasse with its mosaic facade that displays a 14,000x magnification of a titanium surface. To curious sights like the historic steam engine in Eilfschornsteinstraße. To lesser-known locations like the Institute of Aerospace Systems (ILR). And also to well-known architectural landmarks like the SuperC, the Audimax and the RWTH Main Building. These places serve as starting points for presentations of major Aachen research topics. Research projects are often profiled that are actually being conducted at other locations, for example on the new RWTH Aachen University Campus – or at the FH Aachen University of Applied Sciences.

What all these topics have in common is that they are all explained in an easy-to-follow way, whether they deal with Aachen’s contributions to Industry 4.0, innovative learning methods, future traffic scenarios, medical-technical prototypes, artificial mother-of-pearl or products for the energy revolution. “When developing “FLApp”, we adopted the concept of the ‘Sendung mit der Maus’ (‘The Show with the Mouse’ a highly acclaimed German TV children’s infotainment programme). Complex content is communicated in a factually based but at the same time easily understandable way,” Aachen’s Head of Marketing Dr. Jutta Bacher explained while presenting the new guide app together with the RWTH computer sciences expert Philipp Wacker.

When Jesco von Puttkamer was an advisor to the crew of Star Trek
The app presents information on body tissue from the 3D printer, world champions in robotics, haptic vests for people with impaired vision, as well as on engineers who are doing research on how to best protect fish from being killed in water turbine intakes. You’ll discover that the RWTH Aachen University alumnus and FH Aachen University of Applied Sciences professor Jesco von Puttkamer once acted as an advisor to the Star Trek crew. Not that Aachen is exclusively a stronghold of engineering sciences. The city also boasts other small but excellent universities that focus on social sciences or the arts, like the KatHO Catholic University of Applied Sciences and the University of Music and Dance. “Schools should definitely take advantage of this tour guide offer,” recommends Prof. Dr. Doris Klee, Vice-Rector for Human Resources Management and Development at the RWTH Aachen.

Universities and City of Aachen worked together on the development of content and technology
A multitude of makers and supporters are behind the Future Lab app. The content was conceptualised by the City of Aachen’s Press and Marketing department, while the RWTH’s Media Computing Group under the leadership of Prof. Jan Borchers and his team provided the technological expertise. All content was developed in close collaboration with the respective university departments, which are all credited in the footers of the 46 feature articles that “FLApp” contains.

Download “FLApp”
from iOS and Android stores or from
www.futurelab-aachen.de/flapp

Hard facts
“FLApp” is available for downloading in German and English for iOS and Android. It offers audio feature articles, specialist statements, plenty of pictures and even some videos. And for impatient users, there is always a summary at the top of every article. At six of the stations, “Flapp” offers digital 3D objects per “augmented reality” technology as appetisers for the accompanying articles that explore the respective topics in greater detail. From the Cathedral to the RWTH Main Building, the tour route covers a stretch of 1.3 kilometres. A manageable distance with many interesting stops along the way that all function independently of each other. This particular aspect of the app evoked a smile on the face of Dr. Christian Becker, CEO of the Aachen public utilities company STAWAG and one of the sponsors of Future Lab Aachen, who commented that “intelligent routing” had always been one of STAWAG’s great passions.

Routing, signposting, signals and WiFi
“FLApp” is guided by GPS. On the “FLApp” map, users can always see where they are right now and which direction to go for the next station. But the new “path of science” is also physically signposted in the city’s streets so that interested passers-by who happen upon one of the stations and want to know more can also join in the fun. Not only do specially developed Future Lab info-columns mark each station, but, by means of the i-beacons installed in them, they also transmit signals to smart phones as soon as users come within range of the station. And they offer the possibility of downloading “FLApp” per QR-Code – using Aachen WiFi, which, thanks to the cooperation between the RWTH Aachen and the provider NetAachen, is now also available in the area of the “FLApp” tour route.
There are three special cases in terms of the signposting of the “FLApp” stations: the Cathedral, the Town Hall and the International Newspaper Museum, all in Aachen’s historic town centre. Here, existing information boards for the Route Charlemagne have had information about the “FLApp” route added to them, so that information on both the historical and the innovative aspects of each of these sites is available at a single location.
Another special case is the tourist signposting at Aachen’s main railway station, which now also functions as a P.O.I. for “FLApp” and informs arriving visitors of this tour option. 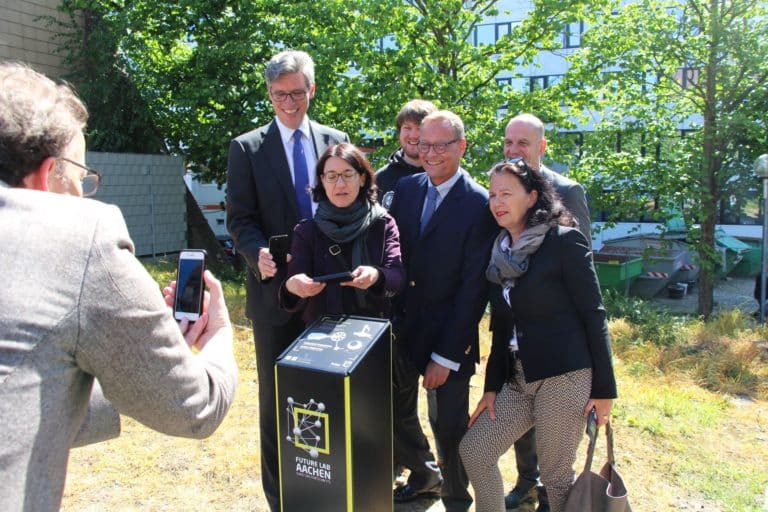 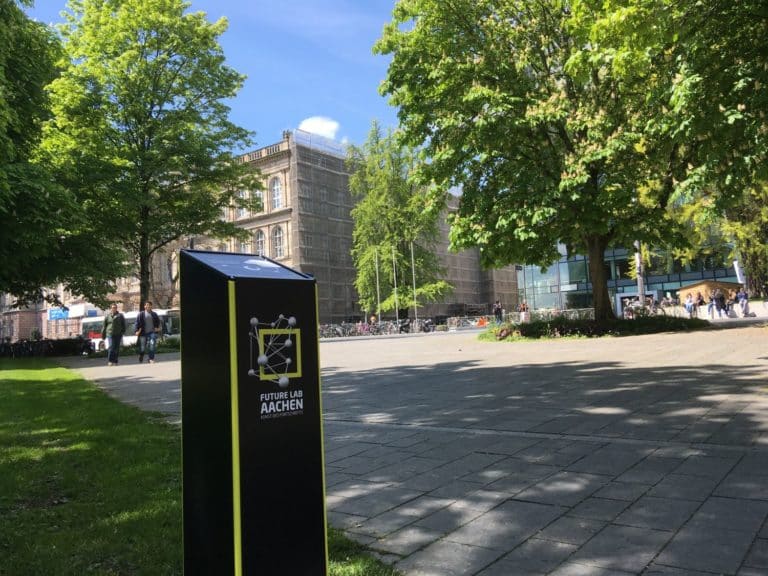 Info-column at the corner of Eilfschornsteinstraße/Templergraben. Just hold your smart phone to it – and off you go! (Photo: Stadt Aachen)

One of the highlights of Aachen’s “September Special 2016” event programme was a 3D pixel mapping show that, […]
Have a look

That was: Archimedes’ Action Day 2019

Excavator operators, buried ducks and a Long Island Einstein – lots to see and do at this year’s […]
Have a look