Will cars of the future coordinate themselves via light signals? 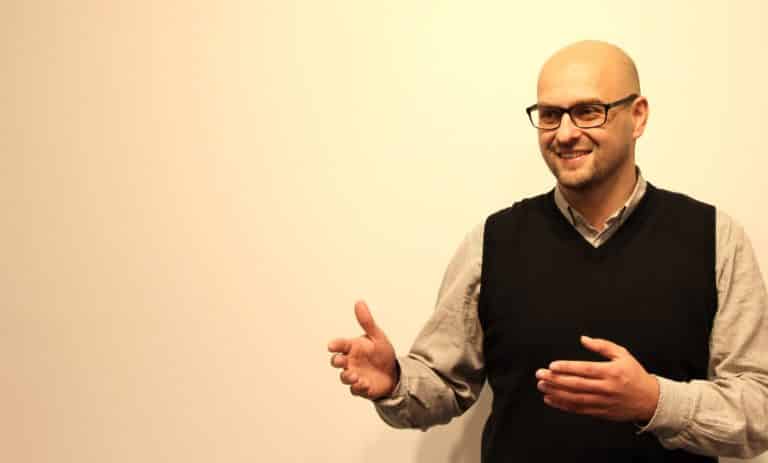 An intelligent hoverboard that transports payloads without any human guidance? In December, Aachen’s general public can take a closer look at this and other examples of the future of mobility in Aachen – in a pop-up store at Aachen’s Market Place (Markt). The store has been set up by Peter Gronostaj in cooperation with the innovation network “Living Lab Aachen” (Erlebniswelt Mobilität Aachen – EMA). Peter is the head of Aachen’s Science Office and is delighted to explain the idea behind this short-term store.

FutureMag: Living Lab Aachen – what’s that?
Gronostaj: It’s the name of an innovation network in Aachen that addresses the social and technological aspects of innovative mobility concepts.

And that means?
The objective of the Living Lab Aachen (Erlebniswelt Mobilität Aachen – EMA for short) is to develop tomorrow’s urban mobility solutions and to provide opportunities for the general public to encounter and experience these solutions first hand – in other words, to turn Aachen into a real-world – or “living” – lab. In this way, everyone who lives in Aachen is invited to become co-developers and work with the research and development drivers to find innovative solutions.

So what are they going to be co-developing?
For example, highly automated driving in bus traffic, or smart logistics like the use of transport drones. This is where the general public’s feedback is important. Every suggestion or idea is welcome and means added value for all.

Pop Up-Store: pop in and get involved!

Who exactly is behind the Living Lab?
The founding partners of the initiative, which started up in May 2018, are the company e.GO Mobile AG and Aachen’s Office for Economic Development, which coordinates the consortium. Further members include the RWTH Aachen University, Ford Werke GmbH, Ericsson, FEV Europe GmbH, Lumileds and the ASEAG. In the meantime, numerous further partners have also come on board, including many university institutes and young start-ups, all of them keen to be involved in the development of this living lab.

And how do you and the Science Office come to be involved?
Actually, it is the Science Office’s explicit mission to act as an interface between science and Aachen’s general public. And because we want to support the activities of the initiative, we’re inviting all of Aachen’s residents to join us in developing the future of our mobility.

So how are you going to achieve that?
Well, we’re kicking off with a pop-up store in the city centre that will run for three weeks. There, we’ll be presenting mobility devices like a prototype called CarrE from Ford that can be used for “last-mile” personal transportation. By the way, visitors will be able to try the CarrE out at the store. The RWTH will be exhibiting a 3D-printed model of its “Silent Air Taxi”, an electrically powered small aircraft. Lumileds will be showcasing the front spoiler of a car that communicates with other road users via light signals – an important aspect of autonomous driving. And there will be lots of scope and opportunity for exchange of ideas and discussion.

Science Office Aachen
Four universities with a grand total of 60,000 students and an academic staff of over 12,000, the Jülich Research Centre, numerous neighbouring research establishments facilities, excellence clusters, the RWTH Aachen Campus – the mission of the Science Office of the City of Aachen, established in 2017 and located in city’s Department for Economy, Science and Europe, is to interface between all these players and Aachen’s urban society. A massive undertaking? Indeed it is. That’s why it makes sense to proceed project by project and to organise illustrative presentations of important future issues.

Why has my train been delayed?

“Attention passengers for the 7.20 RE1 to Hamm. Today’s departure will be delayed by circa 20 minutes due […]
Interview

StreetScooter – How it all began

In April 2016, the German Post announced that it was starting on the serial production of the StreetScooter […]
Interview

Where competitors are the best of friends